Paavo Tynell lamps are in high demand and deservedly so. The genius and extremely diverse designs of these lamps offer a solution for any kind of interior. However, due to this diversity and the fact that a lot of his work was commissioned to private customers, companies, and the public sector, both in Finland and abroad, it is sometimes difficult to identify some of his work. With a career spanning more than 50 years and work done with multiple manufacturers, the task doesn't get any easier.

We, at HADDADIN DESIGN offer a 30-year experience coupled with extensive literature, archive pictures and rare catalogues that can help you identify any Tynell piece. We also offer our expertise, and a rare collection of original parts and the know how to restore any worn, broken, or damaged piece fixture.  As a leading vintage design company in Finland that is specialized in Tynell lamps, we offer free appraisals. We also buy or help you find customers and solutions for your items. We also buy Tynell lamps that are in bad or terrible condition.

If you are looking to sell a Tynell lamp(s), please contact us by phone, WhatsApp, or email, we will contact you back with a valuation or answers to your inquiries. We pay by wire transfer; PayPal and we can arrange for packing and shipping to Finland.

More about Paavo Tynell, Taito, and the history behind the wonders.

Paavo Tynell (1890-1973) started his career as a plater and blacksmith, until in 1912, he joined Koru Oy which was founded by Architect Eino Schroderus. There, he started studying metal virtu and as a student project, he produced his first ever documented brass lamp.

In 1913, Tynell travelled to Germany and worked for a short period in a metal factory before going back to his work and studies at Koru.

In 1916 he left Koru to continue his studies at the Central Applied Arts School (Now Aalto University School of Arts, Design and Architecture) with Eric Ehrström as his teacher. During his first year, Tynell proved to be so skilful, that he was asked by the headmaster Werner Von Essen to join the school as a teacher, which he did in 1917.

In 1918, and along with his teacher E. Ehrström, artist Emil Wickström, industrialist Gösta Serlachius, and fellow metal artist Frans Nykänen, they founded Oy Taito Ab and the world became a brighter place.

Paavo Tynell designed lamps for his company Taito, which was the leading company in Finland and most of the public buildings commissioned their work through it. During that time Idman, Stockmann (owners of Orno), and many other smaller retail companies sold Taito lamps, until in 1953 Idman acquired Taito and the transition started from Taito to Idman. Simultaneously during that period and starting from 1948, Tynell designed lamps for the US market that were sold through Finland House in New York.

The American market received them well and Paavo Tynell had extensive road exhibitions in the United States that helped connecting him with numerous Architects that commissioned many works through Finland House or directly through Idman and or Lightolier. A lot of these projects had unique lamps and sometime difficult to identify designs. There are even furniture pieces designed by Tynell that are extremely difficult to recognize.

In his later years and up until the late 60s and early 70s, Tynell kept designing lighting fixtures and designed a line of candleholders that he handmade himself at his home in Tuusula Finland.

Truly a man who followed his bliss. A bliss that lit up his world and consequently the world around him. Literally. 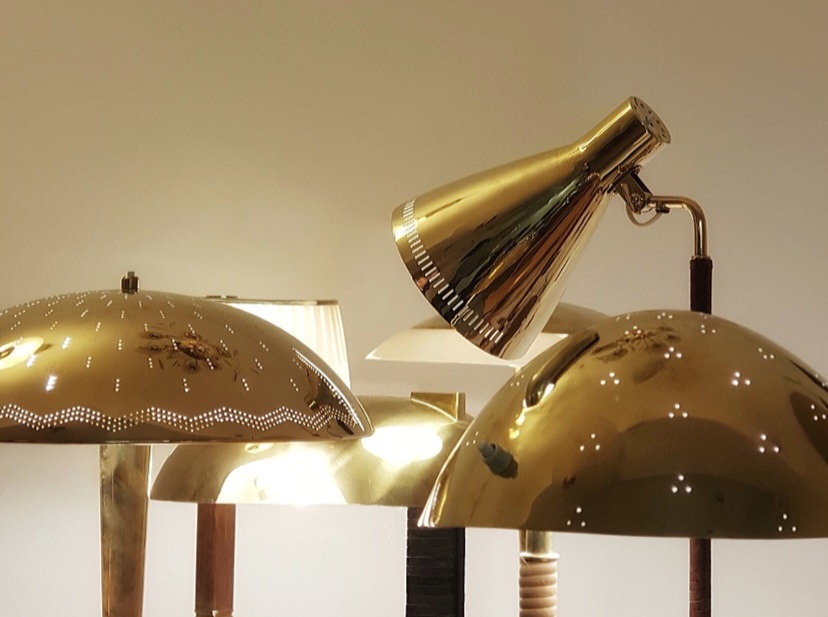 or email us for an appraisal